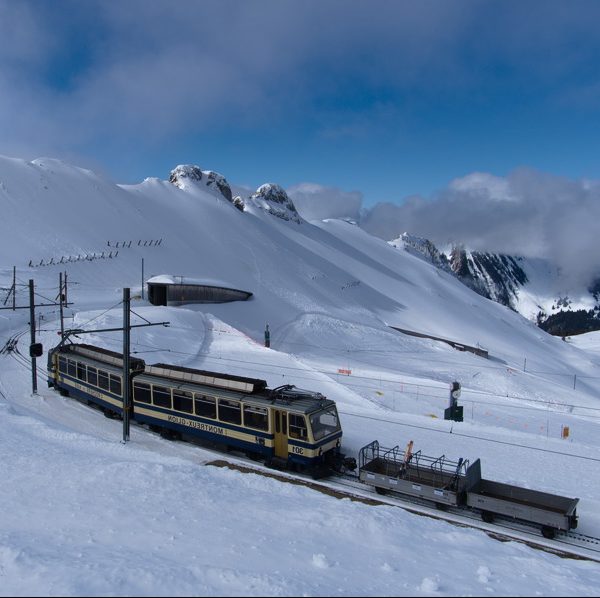 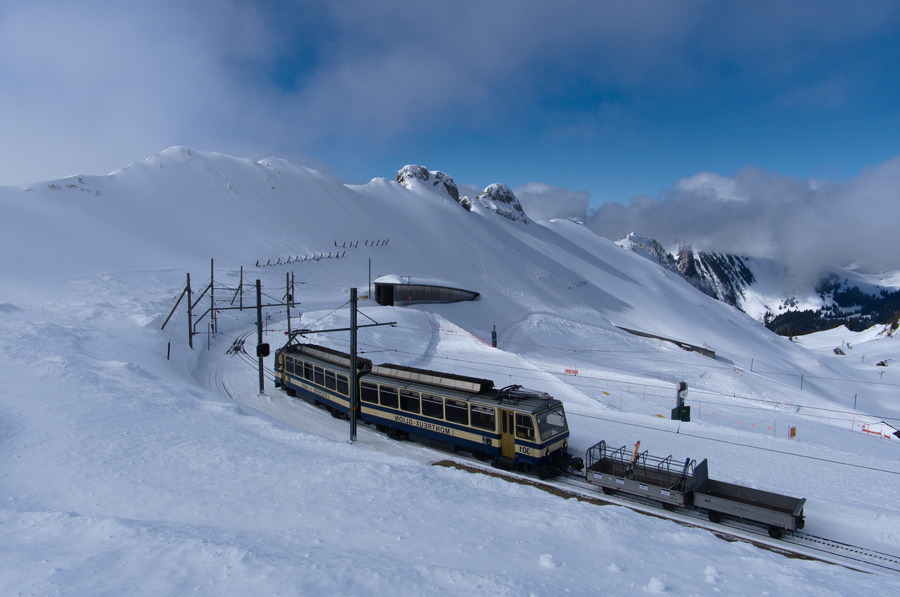 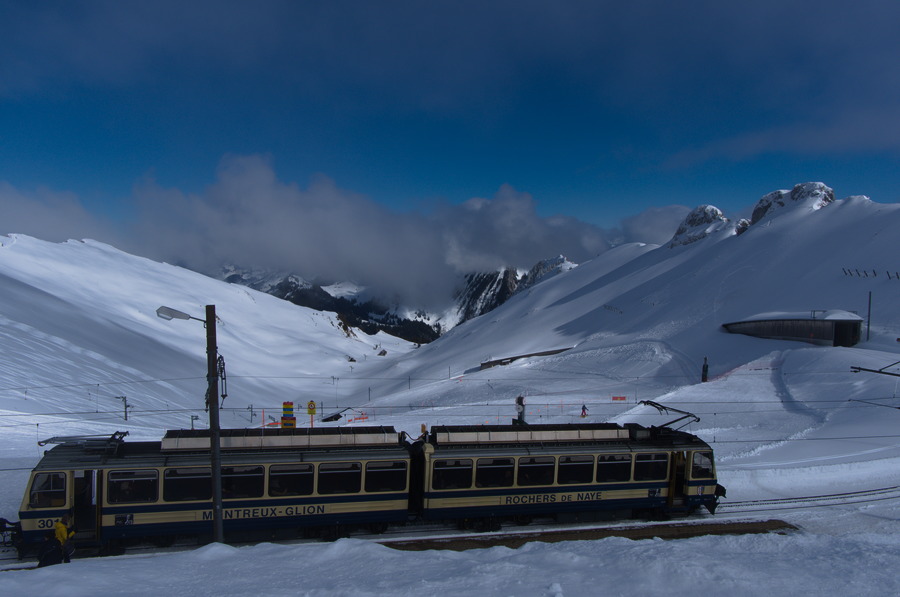 In our last travel post, we took you on an unforgettable journey through the picture-perfect landscapes of Switzerland via the Romanesque Belle Epoque and its equally stylish sibling with a lot more contemporary taste, the Panoramic train. This week we are taking you on another remarkable journey not that far from our base of Montreux yet high enough to make you feel that you are on the crown of one of these majestic princesses of the Alps – Les Rochers-de-Naye. The train travels via rack and pinion railway tracks that are particularly suitable for a steep journey like this one. Les Rochers-de-Naye’s train journey is just as exciting as views from the peak of Les Rochers-de-Naye itself. We traveled with the MOB services before on our trip through the posher cousins Belle Epoque and the GoldenPass Panoramic train. This journey was just equally spectacular if not more and the views from the top were just unrivaled. 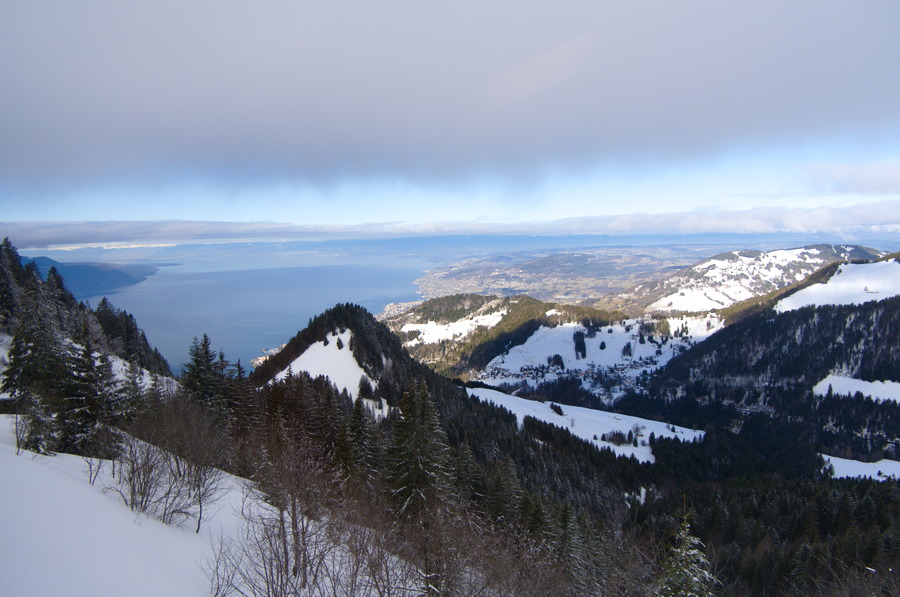 Reaching the elevation of 2042 m at its highest point, Le Rochers- de-Naye is one of the tallest peaks in the area. It’s open to tourism all year round and for a good reason. Winter transforms it into a wonderland where even Santa Clause delightfully comes to reside. Its slopes become the playground for all ages as hordes of tourists and locals come with their skis and skateboards to glide on the silvery silky slopes. They leave wavy patterns behind them that shimmer in the sunlight and add to the charm of the place.

Come during the summertime and you will be greeted by green slopes bursting with wildflowers that add heavenly fragrance to the fresh mountain air. On a clear day, you can see all around, the towering mountains stand tall and proud together, murmuring hymns to the sky gods. Far below, the valleys stretch at the feet of these mountains like a precious carpet. The shores of the lake Léman are decorated with tiny villages and towns that adorn the steep hills like a Roman amphitheater. 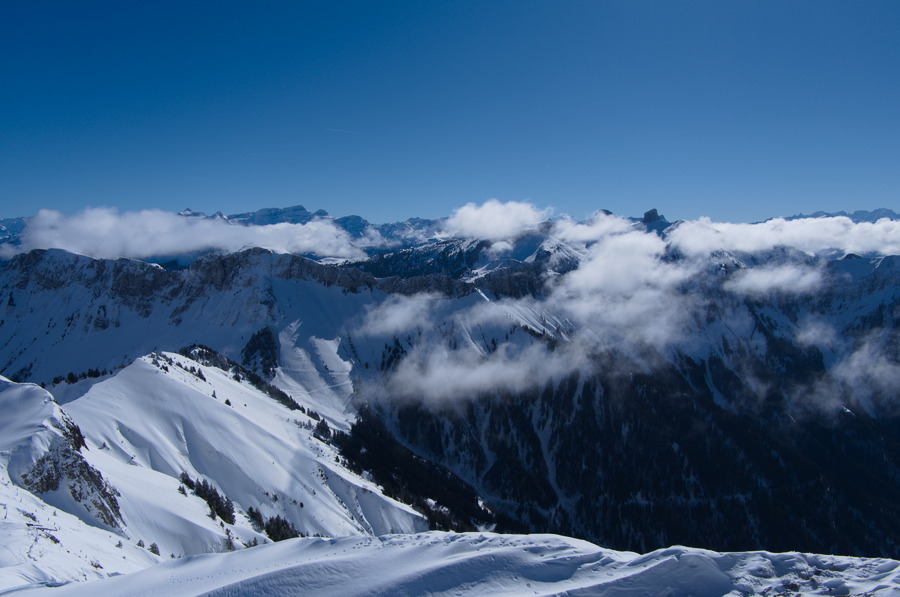 As we arrived at the train station, we were surprised to see a long queue of an enthusiastic crowd all fully prepared with their skis and ski boards, dressed to impress and ready to conquer the colder temperatures at the height of more than two kilometers. 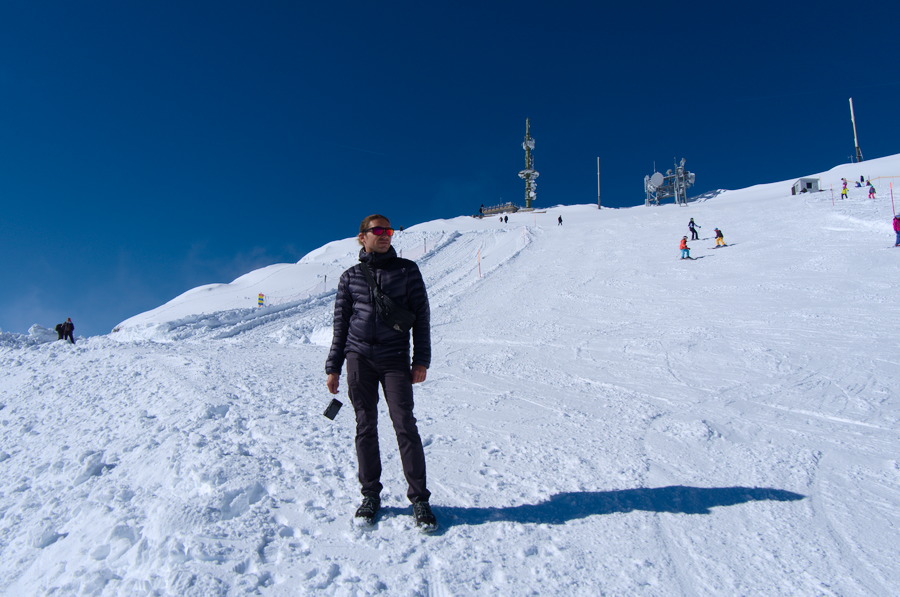 The journey to the top of the mountain itself is a treat. The train passes through the constantly changing landscapes as you ascend higher and higher, leaving the shores of Lake Léman further below. The train passes through a few tunnels just to take your breath away by a new vista each time it emerges out of the darkness. It’s almost like watching an excellent theatre production. Your gaze moves all around trying to absorb the immense beauty surrounding you. 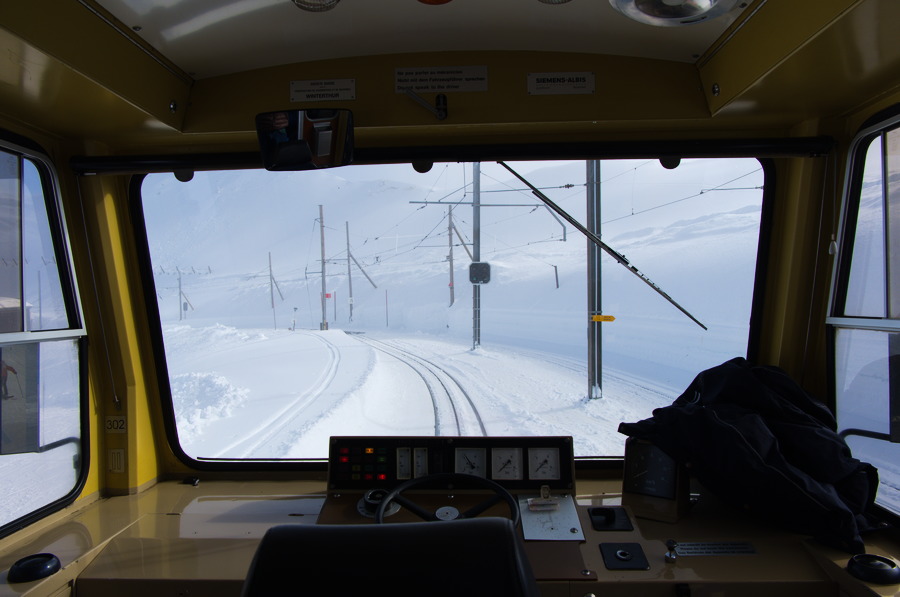 The comfortable chairs and temperature make you feel at home yet you are in the middle of this paradise as you pass through high bridges, steep sloops, and dense forests. The snow had only just started to melt when we went for our journey and the small brooks and springs were still hibernating and covered in snow. As you go up further, you leave the grassy and green forests behind and find yourself surrounded by the snow-covered landscape. The traditional beautiful Swiss Chalets are scattered around as you pass through small villages. You could see the old farmhouses here and there, covered in thick white blankets of snow. 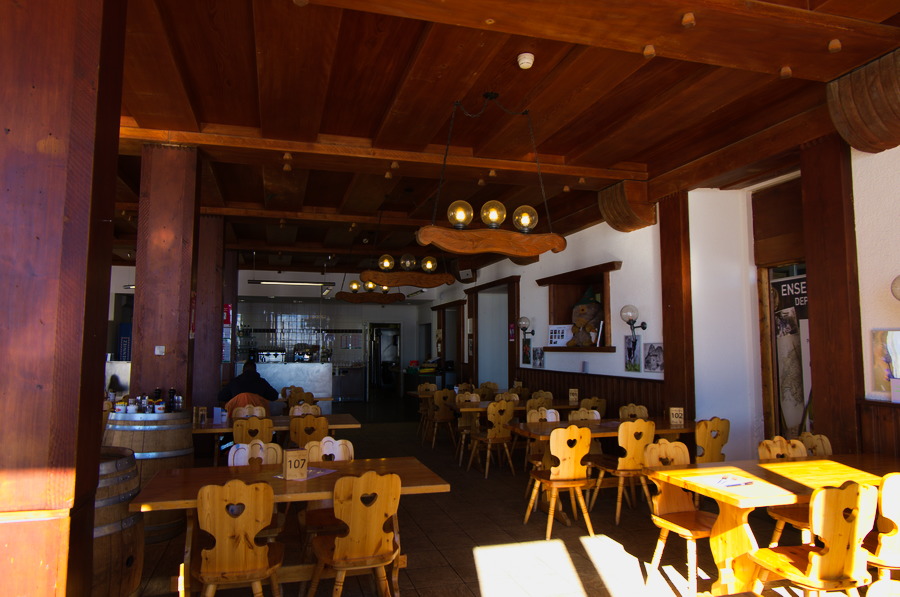 As the train slows down and stops at small stations, you watch locals getting off along with the tourists carrying their skis, heading for one of many ski slopes present all around the region. You can’t help but wonder how life would be, living in such a remote yet well-connected part of the world through changing seasons. 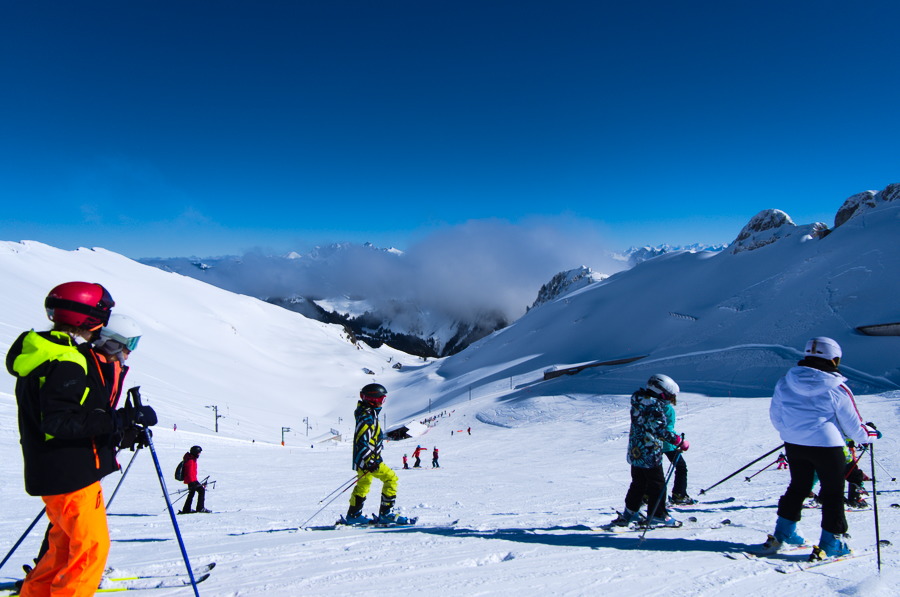 When the train finally arrived at its destination, we were rather disappointed to find out that the mountain was engulfed by thick clouds and visibility was very poor. We could not really see much. We went upstairs to find an empty restaurant. Our guide had told us about another restaurant across a tunnel so we went back downstairs and followed along a narrow path. The long tunnel started as a corridor but soon turned into a cave-like formation.

The restaurant at the end was closed. The door to the back, that would lead to a viewing point was not locked. but heavy snow had blocked it and it was not possible to venture out. We headed back to the first restaurant and ordered a coffee in a hope that the weather would clear up. Luckily we did not have to wait long before the clouds were swept away by the wind leaving the stunning views of the peak and the surrounding vistas exposed.

We did the short hike to the mountain peak while carefully stepping into foot deep snow. On the right-hand side, the smooth slopes were the playground of people of all ages with their skis and skateboards. On the left, you could see the mountain tops across a ridge. The steep hiking path was in front of us while the restaurant and the train station building down below. We continued ahead to reach the peak. 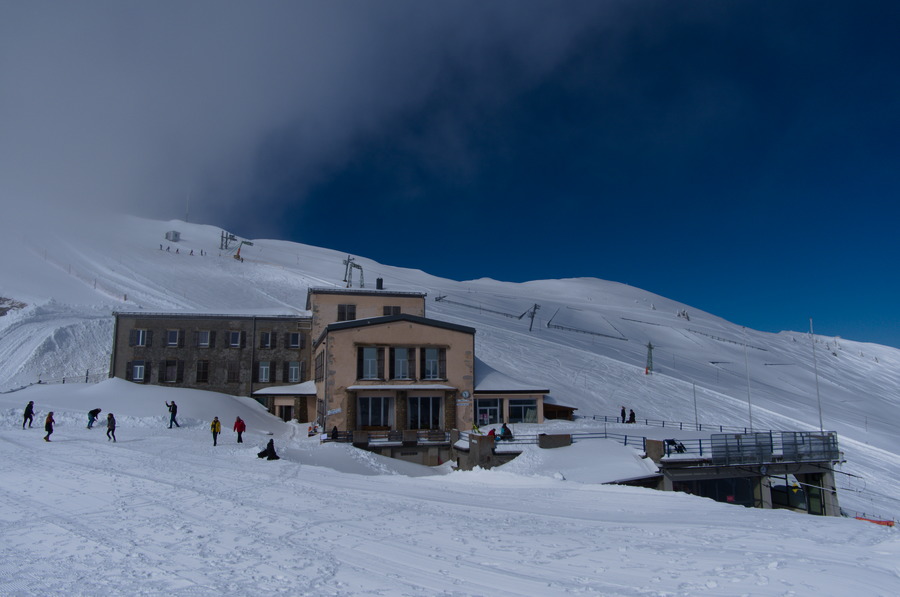 Now we are not hard-core climbers but we have been to several peaks including Indo-China’s highest peak Fansipan Mountain in Northern Vietnam and Montgo Massif near Javea, Spain. While they all offered magnificent views, no place brought tears of joy to our eyes like the views from Le Rochers de Naye.

The 360-degree angle offered an unparallel spectacle in every direction. The mountain peaks went on and on while the valleys below lazed in the spring sunshine. The metallic tower on the peak transformed into a chandelier from the snow. The constant direction of the wind ensured that the snow crystals developed in a flag-shaped pattern, growing in one particular direction.

The crowds of tourists and locals were busy on the ski slopes and the peak of the mountain did not have many visitors. We stood in a meditative state and gazed all around as if standing in a temple praying to the mountain goddess. 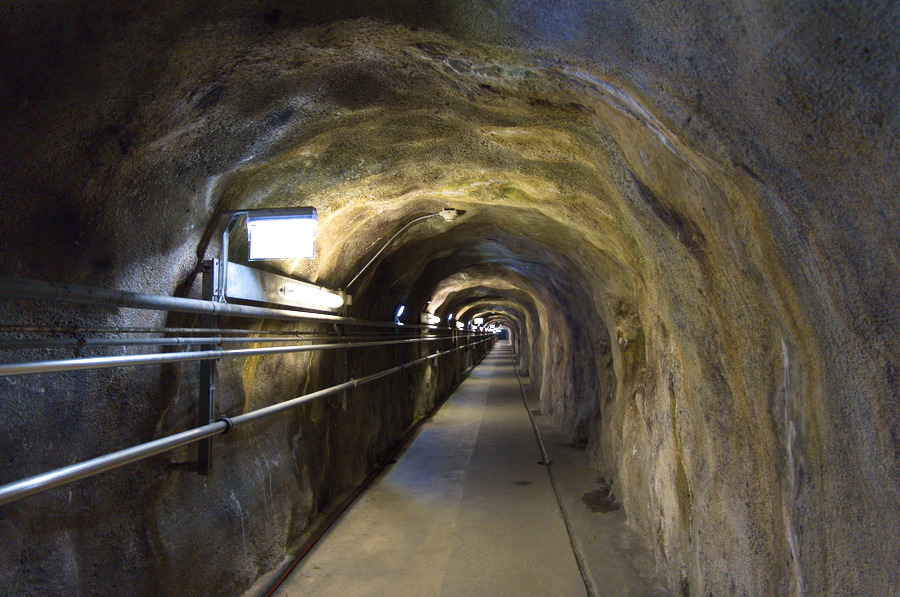 We stayed there for a long time gazing out. The walking paths were all closed due to snow. The famous flower garden and the marmot enclosure were both closed due to the weather. It gave us plenty of time to soak in the views that we do not often get to see. We eventually went down and hung around before heading back through the cozy and comfy MOB train. 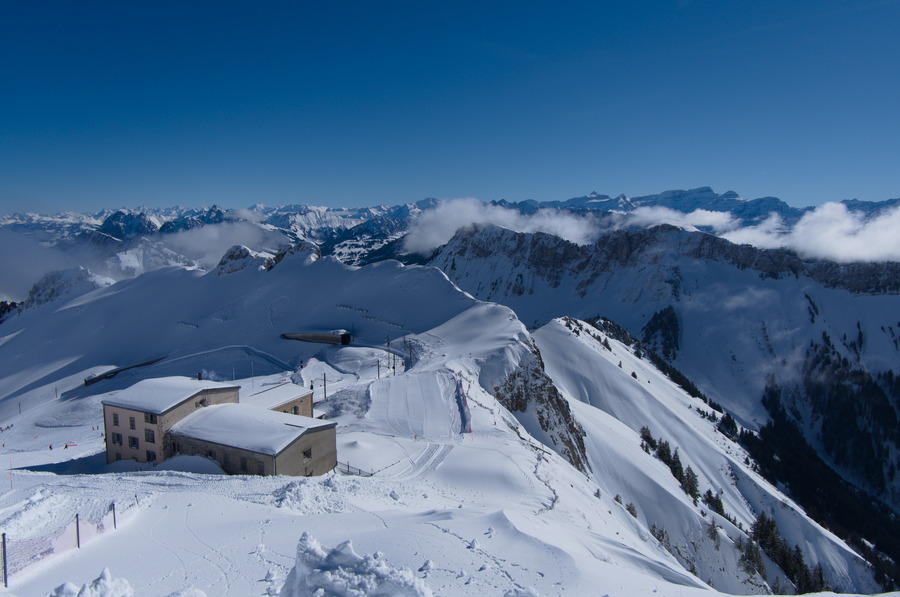 We thoroughly enjoyed our journey. However, we could not help but wonder what this winter wonderland would look like in spring and summertime. The journey is strange in the sense that it thoroughly fulfills you and yet leaves you longing for more. As if the snow-covered slopes promise you that the second trip would be even more magical. We knew that we have to come back again to see the views when the mountains and valleys change their bridal attire and put on their green robes with sprinkles of rainbow colors of the wildflowers.

If you happen to be in Montreux or its vicinity, no matter what the season may be, don’t forget to take the spectacular Les Rochers-de-Naye train journey. The MOB website, www.mob.ch offers all details to plan your journey and you can book the tickets in advance too. 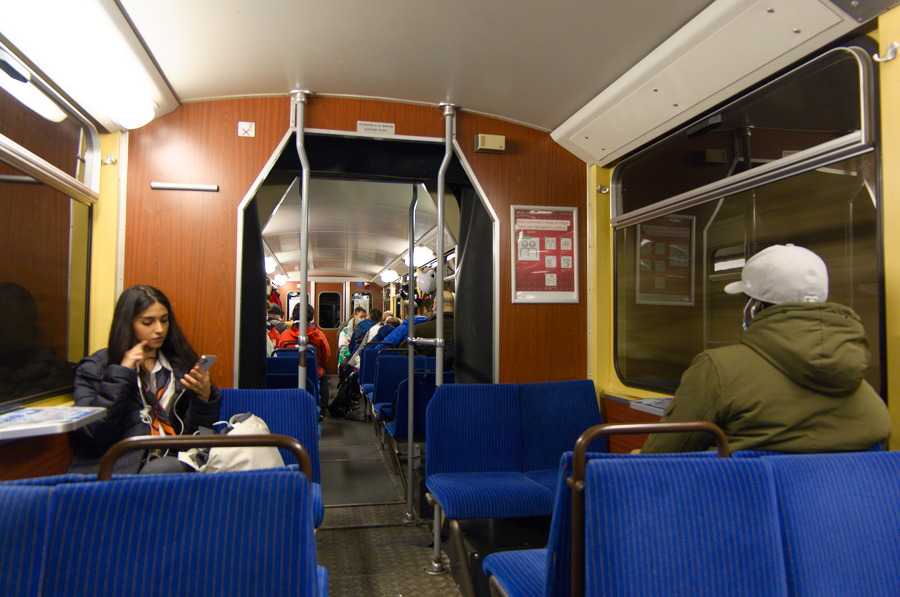 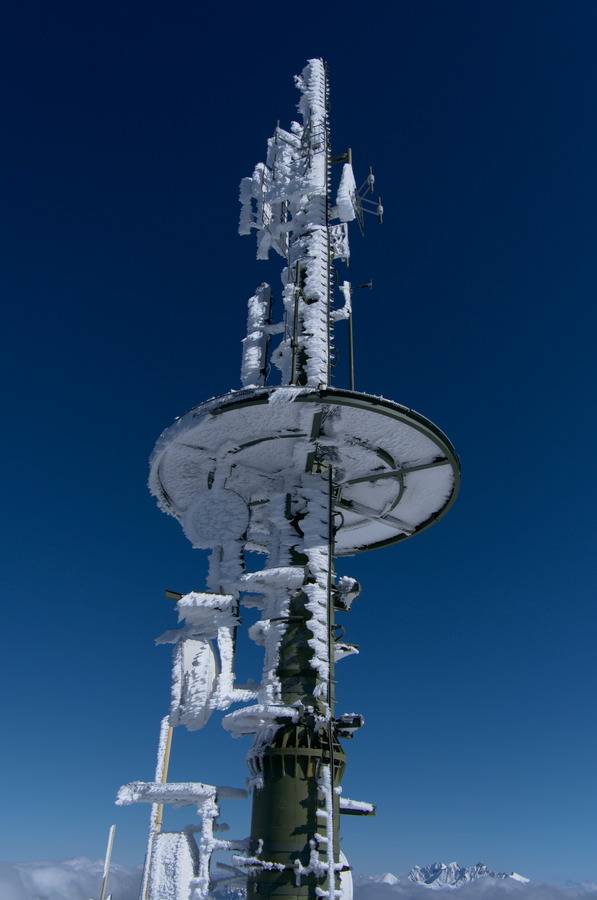